View Gridline Newsletter #13 on the BGFMA website by clicking the link below and opening the newsletter http://bgfma.org/news.htm

Interstate 81 is a vital trucking route along the Appalachian corridor and in particular, south central Pennsylvania. Years of heavy traffic and the harsh Northeast weather abused the parallel bridges spanning Leitersburg Road near Greencastle.

The conventional concrete bridge decks and steel girders on both the northbound and southbound bridges were in poor condition and needed to be replaced. Without any economical detours available, one of the main challenges the Pennsylvania Department of Transportation (PennDOT) faced was how to rehabilitate the structures and maintain both lanes of traffic in each direction throughout peak traffic times.

The entire article can be found on the Roads & Bridges website by clicking the link below: http://www.roadsbridges.com/use-precast-grid-deck-supports-staged-construction-and-accelerates-superstructure-replacement

TECH-LINE #12 is now available online! To view the latest TECH-LINE and/or past bulletins & reports visit http://bgfma.org/bulreports.htm 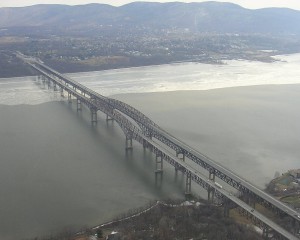 The nearly 8,000-ft long Hamilton Fish Newburgh-Beacon Bridge is the busiest of 5 toll structures owned and operated by the New York State Bridge Authority (NYSBA).  It’s comprised of parallel articulated truss spans that carry more than 25 million crossings per year on NY Route 52 / I-84 over the Hudson River between Newburgh and Beacon, NY.   The original two-lane bidirectional north span was opened in 1963, but in just one year traffic volumes exceeded the capacity.   To accommodate the increased traffic, a parallel south span was opened in 1980 with three vehicular lanes and shoulders on each side, and a separated sidewalk for pedestrian use.  Currently each of the twin spans carries three lanes of traffic in opposite directions.  Over 30 years of heavy traffic on the south span deck took its toll, and in early 2013 Kiska Construction Corp. USA was awarded a $93.5 million, 430,000 square foot deck replacement contract.

The contract required a durable new deck system and a construction sequence that minimized daily traffic disruptions to commuters, which is where custom engineered grid reinforced concrete deck panels came into play.  The plan, developed by Ammann & Whitney along with input from the NYSBA, involved nighttime panelized deck replacement utilizing precast grid panels with full depth concrete.  Precast grid deck systems are common when accelerated construction is needed, and are typically attached to the structure like any other precast concrete deck via headed shear studs and a concrete haunch closure pour over the supports.  What is unique about the 1,850 grid deck panels being used on the Newburgh-Beacon Bridge is the method used to attach them to the supports below, which does not require a concrete haunch closure pour. 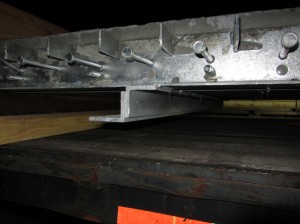 Details for the Newburgh-Beacon Bridge utilize steel angles shop welded to the bottom of the grid main bars (see photo on left), which are then field welded to the supports by the contractor.  LB Foster, a fabricating member of the BGFMA is supplying the steel grid panels to Kiska, and also played a key role working with the owner, consultant and contractor prior to fabrication to develop the required deck connection details.  Attention to small detail and accurate field measurements were critical during the early stages to ensure proper fit-up during construction, as an aggressive replacement schedule allows little room for error using precisely sized precast panels and the welded angle attachment.

The project is currently underway and scheduled to be complete in late 2015.  So far the project is moving smoothly without any glitches, and the reduction in required closure pours as a result of the unique deck connection detail has helped accelerate construction with Kiska replacing nearly 3,000 square feet of deck during each nightly closure.  Another benefit to the field welded attachment method is that it will allow the owner to replace deck panels on an individual basis if they are ever damaged. 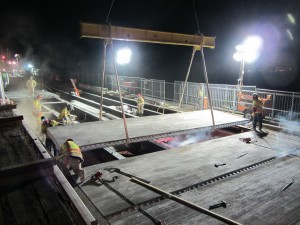 Check out the April 2015 Roads & Bridges Magazine for the BGFMA article about replacement of the Memorial Lift Bridge in Portsmouth, NH & Kittery, ME.  The article specifically explains briefly how the prefabricated and lightweight grid deck system helped with design and construction. 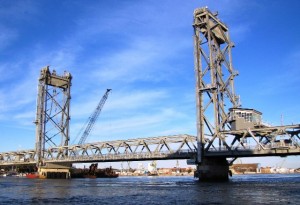 The Georgia Department of Transportation maintains a network of roads and bridges that carry some of the highest traffic volumes in the country, and often employs accelerated bridge construction products when rehabilitating its structures, as was the case in the recent rehabilitation of two eastbound and two westbound structures spanning the Alcovy River and Alcovy Watershed on Interstate 20,…

The full article can be found on the Roads & Bridges website at: http://www.roadsbridges.com/georgia-dot-uses-precast-deck-panels-accelerate-rehabilitation-i-20-bridges?eid=216703317&bid=953765

The University of Toledo ASCE group assembled a Steel Bridge Team to participate in the annual ASCE-AISC Student Steel Bridge Competition on April 10-11, 2015.  This was the first time in many years that Toledo had entered a model in the steel bridge competition, so the BGFMA was proud to be a sponsor the student group.  Our financial contribution helped get the team up and running and pay for materials required to fabricate their competition model.  Congratulations to the UT team on their 4th place finish in the regional competition!  This is a great achievement, especially considering none of the students had previous experience competing in the event! 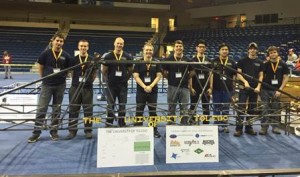 The BGFMA will be an exhibitor/sponsor at the following 2016 conferences:

The original Memorial Bridge, a through-truss lift bridge that carried US 1 over the Piscataqua River between Portsmouth, NH and Kittery, ME, was opened in 1923 in dedication to the sailors and soldiers of New Hampshire who participated in World War I.  The bridge served commuters for 88 years before it was finally closed to vehicular traffic in 2011, due to structural issues that were common to bridges of this age.  It was determined that the bridge was beyond a state of economical repair, and the replacement project began in 2013. 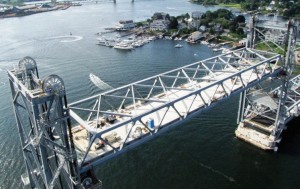 Bridge replacement was carried out through a design-build contract with the selected team of Archer Western and HNTB heading up the project for the New Hampshire DOT and Maine DOT.  The new bridge design boasts a similar look to the old structure, yet incorporates many modern engineering innovations and efficiencies, such as a lightweight and durable Exodermic® deck.  The strength of the Exodermic® system also allowed the design engineers to span the deck across floorbeams, eliminating the need for stringers which saved additional weight and cost.

Not only was weight savings critical because it’s a movable span, but also due to the innovative construction method used to deliver the project.    The 10,000 square foot lift span was completely fabricated offsite and floated into place to accelerate the project, which was completed one month ahead of the 19 month pledged delivery schedule.  The modern design and creative delivery method shortened the construction schedule considerably, as typical projects of this magnitude and complexity often take months longer to complete.

The BGFMA was a proud sponsor of the National Student Steel Bridge Competition (NSSBC), hosted this year at the University of Akron.  Forty-seven universities from across the United States, Mexico, and Canada participated in the competition, which took place on May 23-24th.  Only the top few teams from each regional conference were invited to take part in national competition, so great job to all of the teams that qualified.  Special congratulations to the student team from the University of California, Davis, who was crowned the overall winner.